It is with the greatest pleasure and pride we announce that this winter, James release their very first box set, encompassing the whole of their 30 year history.

The Gathering Sound heralds the debut of 12 previously unreleased songs, including lost classic Gregory’s Town, Scratchcard, Count Your Blessings, their second ever demo Willow, the thrillingly titled Jam 1 and Jam 2, even excerpts from the infamous and allegedly scandalous ‘Whiplash Tapes’. All told, the box set will mark the first official release of 33 live recordings and demos, from the early 80s right through to the present day—with some of the earliest material having been recently unearthed in a time capsule (disguised as dusty bin bags) in an attic in fashionable West Didsbury.

This deluxe set includes 3 CDs, a DVD, a 12″ record, and a custom J-shaped USB stick—in addition to some fun historical goodies, writings, exclusive photos and artwork.

Live rarities include highlights from the 1992 Alton Towers gig before a crowd of 30,000 ecstatic (if somewhat sodden) James fans, plus Glastonbury 1990, Brixton Academy, Manchester Apollo, London Town & Country and more. Even vintage live favourite Burned makes an appearance—recorded at Moles Club in Bath in 1988, this was previously only available on the long out-of-print collector’s choice One Man Clapping.

But wait, there's more! This glorious package also features the first CD pressing of Sire-era b-sides and the Weather Change flexidisc from the 1990 tour programme, exclusive release of BBC archive material from historic concerts in the 90s, and the DVD premiere of the celebrated 15-track Come Home Live video filmed at the euphoric Manchester GMEX show in 1990—sure to bring back memories for those of you who braved the winter storms to be there. 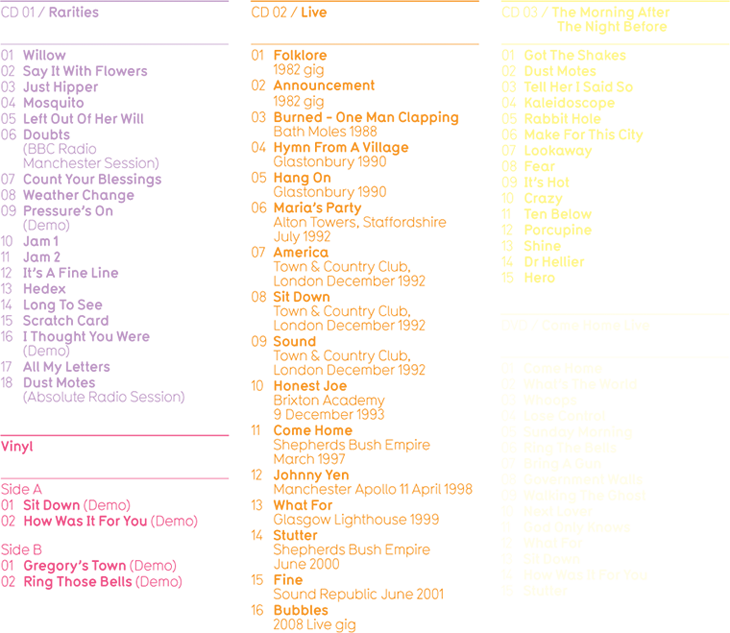 Bonus tracks Coffee And Toast and Child To Burn will be available to download separately.