Presenting our new music video: Girl At The End Of The World

Our new music video for current single Girl At The End Of The World is finally being premiered tonight by Culture Collide, and you can watch it on their website here.

The haunting and thought provoking film was made by award winning director Kris Merc (who also directed To My Surprise) and stars Brandon Flowers and Alexandra Chelaru.

Tim says, “Kris’s ‘To My Surprise’ video is already an official selection for the Annercy International Film Festival, it’s up against adverts created on a hundred times his budget. Once again he works miracles for us, creating this video of beauty on the budget of a lyric video (Monopoly money), made from the generosity of his spirit and sticky back plastic. It contrasts the release of the departed with the grief of those left behind and is beautifully cast, acted and danced.”

We are so sorry to announce that one of the band has taken ill and our show at Nottingham’s Royal Concert Hall tonight will need to be rescheduled. We intend to reschedule for later this year.

The band appreciate your understanding and support on this disappointing end to an incredible tour.

Ticket holders will be contacted ASAP with further details, please refer to your point of purchase for any refunds required.

In the meantime, feel free to send Tim good wishes for a speedy recovery on Twitter via @RealTimBooth.

Our show at Nottingham’s Royal Concert Hall on Saturday which we sadly had to postpone, has now been rescheduled for Tuesday 6th December 2016. All tickets for the original date are valid for 6th December and ticket holders will be contacted by their ticket agent. We apologise for the unwelcome news that there wasn’t availability to reschedule this show for a weekend. Please refer to your point of purchase if a refund is required. The band appreciate your understanding and look forward to a special show in Nottingham in December.

Note from Tim to gig attendees

We had a little incident at the gig last night which Tim has written a few words about, please take a moment to read his blog if you’re coming along to one of the shows.

Wonder of wonders, the band are to embark on a Euro mini-jaunt this summer, playing at the Melkweg in Amsterdam on Sunday 19th June, and Berlin’s Columbia Theater on Monday the 20th.

If you’re thinking of booking travel, you may wish to hang on until the end of the week, as there is one more possible date up in the air at the moment…

UPDATE: We’ve now confirmed the third and final show in this series: Le Trabendo in Paris on Friday 17th June. Tickets on sale now, visit the Live page for links.

We’ll also be doing the VIP Soundchecks at these three shows and you can buy a separate upgrade to use along with your concert ticket. These are available from the web shop.

Within striking distance of London on Saturday?

The band are beavering away in rehearsal rooms preparing for the Girl At The End Of The World Tour which kicks off on Monday, and they’ve decided to throw the doors open for a couple of dozen fans on Saturday night… They’ll be performing an informal rehearsal set of about 60-90 mins before an audience of a few friends/family/business associates plus 20 fans who’ve been lucky enough to win tickets to this once in a lifetime experience.

Wanna come? Here’s how you can be in with a chance. Send us a photo that shows, in your own way, you’ve got nothing but love for the band. You need to feature in the photo but otherwise it’s up to you how you express it. Surround yourself with your James collection. Show us your James tattoo. Model your favourite James t-shirt. A piece of art inspired by their music. Show us your kiddies named in honour of the band: James, Daisy, Daniel, Grace, Larry, Chunny Lad (errr instant winner if you’ve got a birth certificate proving that one!), your band inspired by James, or whatever else!

Post it on Facebook here, tweet it with the hashtag #wearejames, or e-mail it to competitions[at]wearejames[dot]com before the closing time of 7pm tomorrow night (Friday 29 April). The band will select 10 winners of a pair of tickets apiece, and we’ll notify you as soon as we can, hopefully late Friday but possibly Saturday morning.

As this is such a special opportunity and places so limited, it’s important we don’t let a single ticket go to waste, so please only enter if you’re able to come. We’ll let the winners know the exact time and place, but for now all we can say is it’s taking place in London on Saturday evening.

Good luck one and all! We’ll see some of you on Saturday.

Delighted to confirm the band will be back in the Radio 2 studio next weekend as guests on Dermot O’Leary’s programme (with Jo Whiley sitting in), playing a couple of tracks for the Saturday Sessions, and chatting about their new single, title track Girl At The End Of The World.

Tune in on FM, DAB or online between 3-6pm. If you miss it you’ll be able to catch up later via the BBC Radio 2 website.

As some of you may be aware, there’s been ongoing structural repair work taking place at Shepherd’s Bush Empire this year, which was expected to be complete in time for our show there on Wednesday 4th May.

We’re sorry to have to confirm that the repairs have not yet been finished, and in the interests of safety the venue won’t be able to reopen in time for our show.

But fear not, the gig will go ahead on the same date and will simply move across town to The Forum in Kentish Town. All tickets for the original venue remain valid, you don’t need to exchange them to attend.

Sincere apologies for any inconvenience caused, we’d love to have been able to go ahead with the show there as planned, but in the circumstances we feel a move to The Forum is a very good solution and hope you will too.

An unexpected perk is that The Forum holds 200 more than Shepherd’s Bush Empire, so although the show was sold out we can now make squeeze a few more of you in to see the show. The additional tickets go on sale tomorrow, Tuesday 19th April via gigsandtours.com and ticketweb.co.uk.

Tune in to Shaun Keaveny’s programme on BBC Radio 6 Music tomorrow morning to catch the first play of our new single from Girl At The End Of The World, as well as Shawn’s chat with Jim.

Straight in at No.2!

Girl At The End Of The World has played a blinder and gone straight into the Official UK Albums Chart at No.2!

Massive congratulations to the band, heartfelt thanks to the fans.

And a standing ovation for Team James at our new(ish) record label BMG; whose passion for the band has shone through from the start, and spurred them on to help us achieve these lofty heights.

Join us all in raising a glass to the Girl tonight! 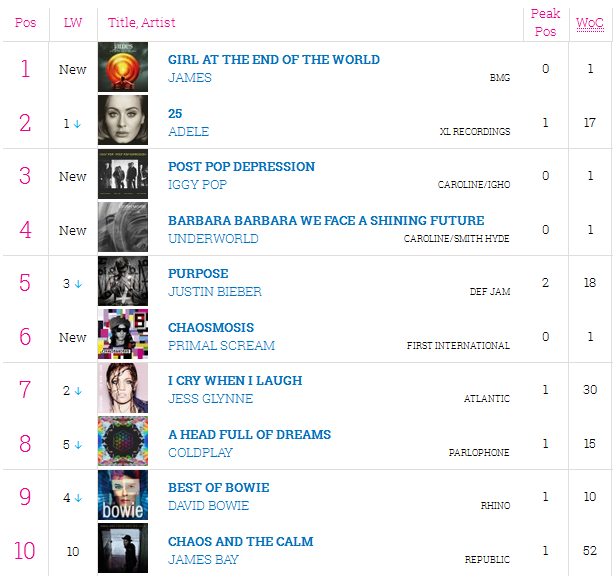 With the final day of sales for the first week’s chart position upon us, everyone’s asking where they can get their copy and ensure it’s counted, so we’ll run through the options for you here.

Purchases of a new copy of the album from any store that reports to the OCC will be counted (this is pretty much all major retailers selling it new, in any format – CD, vinyl, digital download, even cassette!), but they only report sales up to a certain cut-off time today and the time varies from one vendor to another.

Orders placed in the James Shop by 5pm today will count towards this week’s sales. After 5pm, Amazon Prime members (or anyone who chooses ‘next day delivery’) can order up until around 8pm – just check there is still the option for your copy to arrive tomorrow and you should be okay. (Although note the delivery time in and of itself is irrelevant, but Amazon register the sale with the OCC when they take payment or ship, so that needs to happen today).

You can purchase the CD or LP online until midnight from Banquet Records, and the CD only from this web store; both have confirmed they report sales to the OCC until the official sales cut-off at 12am tonight.

And you can, of course, pick up a copy in person in-store until closing time or midnight, whichever comes first.

Digital formats purchased until midnight will be counted towards this week’s sales. That includes iTunes and various other digital outlets. 7digital have the album marked down to £5.99 for MP3 and £7.99 for FLAC today if you’re looking for a digital bargain.

Thanks one and all for your support and enthusiasm this week, and your keen interest in ensuring your copy is counted!

The final Top 100 Albums chart will be revealed by the Official Charts Company at 5:45pm tomorrow.

To put things in perspective, La Petite Mort’s midweek was No 5 and it dropped to 11 in the proper end of week chart. We’ll be delighted if Girl hangs onto a Top 5 spot, that would be a brilliant result for band and fan alike.