James Allan and Joe Duddell join the bill for Manchester 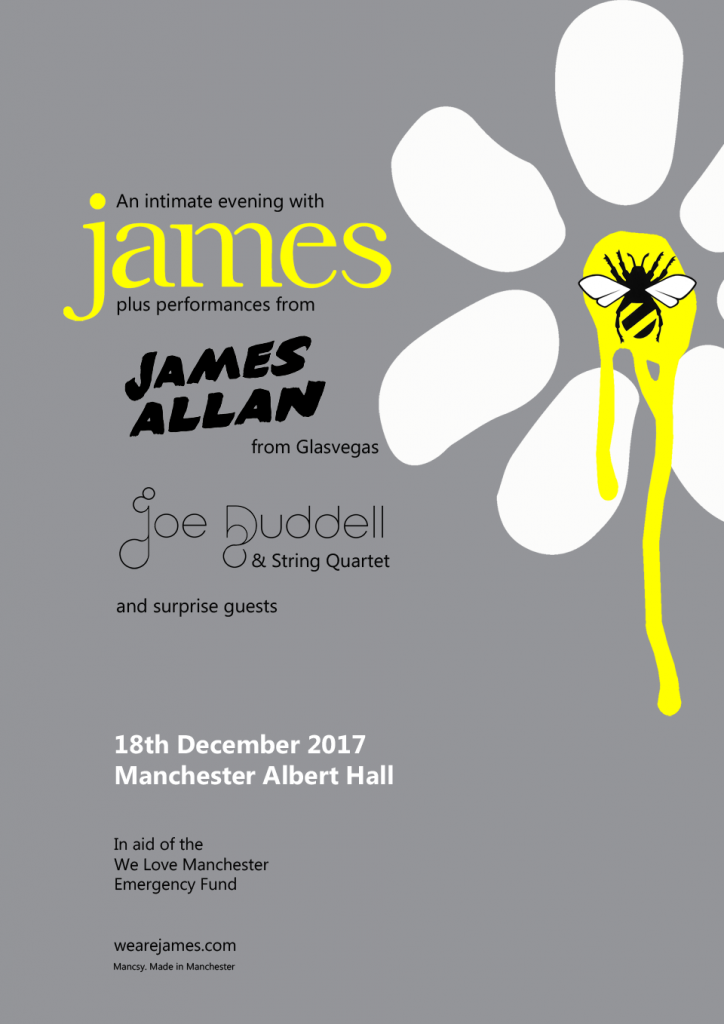 I’m very pleased to announce that joining us for our ‘We Love Manchester Emergency Fund’ gig, will be James Allan from band favourites the brilliant Glasvegas.

James has kindly offered his services as a solo performer and we are delighted he has.

Plus the wonderful Joe Duddell of ‘James Orchestra Tour’ fame has also kindly volunteered and is joining us for a few songs with a string quartet.

We will also have some surprise special guests appearing on the night, so make sure you’re there for doors opening so you don’t miss anything.

Christmastime Benefit Gig For Manchester – An Intimate Evening With James 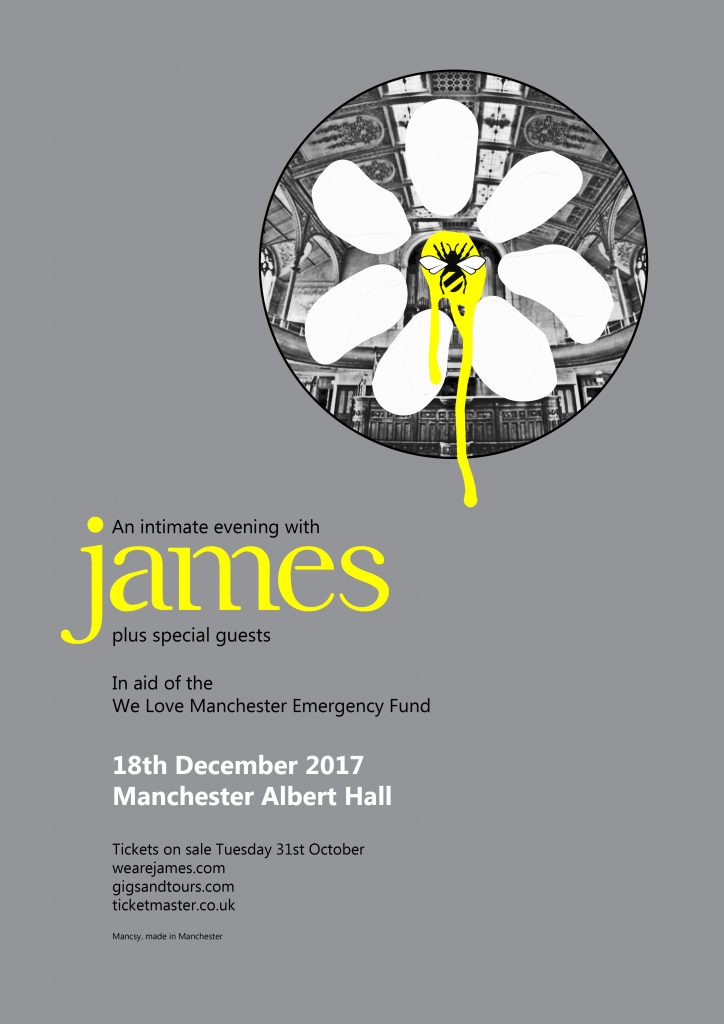 “Very happy to announce this benefit gig that we have been trying to make happen since the atrocity took place. Please excuse our tardiness. We intend to make a memorable night of this intimate gig. With love, James.”

On Monday 18 December the band will play a special one-off show at Manchester’s beautiful Albert Hall.

Tickets will be priced at £45 and the band will be donating all net proceeds from ticket sales to the We Love Manchester Emergency Fund, which was set up by Manchester City Council in partnership with the British Red Cross, in aid of bereaved families and victims of the May 2017 attack at Manchester Arena.

On sale at 10am on Tuesday 31st October, visit the Live page for links and phone numbers. Note this is a 14+ show, and there will be a 2 ticket limit per purchase.

A big thank-you to local artist Mancsy for donating his time and poster design to the cause.

Delighted to announce our music video for Dear John from Girl At The End Of The World has been nominated for Best Animation at the Berlin Music Video Awards.

Congratulations to director Péter Vácz and his talented team — and good luck! The video will be screened at the BMVA festival on 18th May, with the awards ceremony taking place the same evening.

You can watch the mysterious and quite wonderful video here.

Newmarket Nights – See you at the races

James will play at Newmarket Racecourse for the first time on Friday 4th August, as part the Newmarket Nights ‘after the races’ summer concert series. For more information on the event please visit the Jockey Club Live website.

Tickets are on sale this Friday 7th April at 8am. See live page for links. Prices start at just £26 for adults and £13 for children aged 5-15. Under 4s are free.

Bargain of the summer?

Game of Thrones—Those who feel the breath of sadness…

Manchester meets Westeros in the new Game of Thrones trailer for Season 7: Long Walk. Have a watch/listen below, or here on the official Game of Thrones YouTube channel.

The internet is already abuzz with chatter and questions about from whence and whom this song came.

Never mind Winter. Batten down the hatches, Manchester is coming…

For those unfamiliar with Sit Down, here’s a live version the band recommend, filmed at T In The Park in the summer of 2007.

Tim says: “Having read the books, and watched the series twice, I was very excited when Game of Thrones asked to use Sit Down for their preview. I think the last two songs used were ‘Heroes’ and ‘Wicked Game’ – so we are in great company.

“We thought they would make their own version, to suit the landscape of the series, but apparently they were attached to the original. Now if only they would invite us to perform at Daenerys’ coronation…”

James will be playing the first ever Hope & Glory festival in Liverpool this summer, headlining the Saturday night on 5th August.

According to the organisers, “the festival is set behind St. George’s Hall, in St John’s Gardens and William Brown Street where 12,500 fans can enjoy the festival while indulging in the stunning Victorian backdrop of the World Museum and City Library in a specially created arena – all within a few hundred yards walk of the main Lime Street train station.”

Weekend tickets are on sale now priced at £89 for adults. There are discounted tickets for Under-16s (£59) and Under-10s (£49); and children under five years of age may attend free of charge, but note you do need to book a ticket for them. We do not have any official inside info on potential availability of Day Tickets, but at time of writing, the event website states in the ticketing FAQs: “there will be a very limited number of day tickets available on sale much closer to the festival dates”.

Delighted to confirm the band are finally coming back to Mexico this spring, to play the brand new Roxy Fest in Guadalajara on 1st April. And they’ll be playing alongside Morrissey for the first time in donkey’s years, come along and you’re in for a treat.

Tickets on sale now via the live page.

James are playing in the beautiful Royal Botanic Gardens, Kew, on 15 July as part of the Kew The Music summer concert series. Bring a picnic! Or if you’re feeling flush and/or lazy you can book a hamper to collect on arrival. There are other mad options too like a BBQ in the Orangery… Tickets on sale now via the live page. Note there’s a good discount for kids aged 1-16. (Adults £40, kids £22, under 1s free.) Bring the family and make a day of it.

Delighted to confirm that Manchester band The Slow Readers Club – purveyors of their own excellent brand of “indie electro doom pop” – has been added to the bill for Echo Arena, they’ll be playing a special set in the foyer at 7pm.

Jim and Saul selected them personally for the slot and highly recommend you come down early and check them out!

Full PROVISIONAL timings for the evening below. Please note these can and do change sometimes – bear that in mind when arranging travel.

There are still a few tickets available from the Echo Box Office, so it’s not too late if you wisely decide you can’t miss this.

There have also been many last minute fan spares offered (at face value) – including the much sought after standing tickets – your best bet for these is to check the comments section on recent posts about the gig on our facebook page as well as the event wall, and on Twitter: #GirlTix.

Hey Manchester, ready for round 2 at Castlefield Bowl? James are headlining next summer’s Sounds Of The City on Friday 7th July 2017.

Tickets on sale this Friday 2nd December at 9:30am, see live page for links. Get Santa on the case and we’ll see you there!